Showing posts from January, 2011
Show all

Divide me in 4, please

Here’s my problem. I haven’t figured out how to be in multiple places at once.

I can’t come up with a way to do all four at once.


It's all about comprimise....but right now....I want it all.
3 comments
Read more 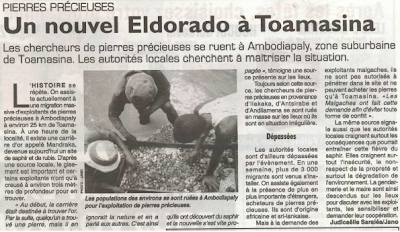 History repeats itself. There is currently a massive migration of precious stones miners in Ambodiapaly, approximately 25 km from Toamasina. One hour from the village, there is a gold career called Mandraka, which currently becomes a sapphire and ruby site. According to a local source, the deposit is important and some miners only have to dig about three meters depth to find the stones. “At the beginning, the career was intended to mine gold. Thereafter, somebody found a stone, but he did not know the nature of it and spoke to someone else about it. That was how they discovered sapphire and the news spread out quickly”, testifies a source present at the s…
1 comment
Read more 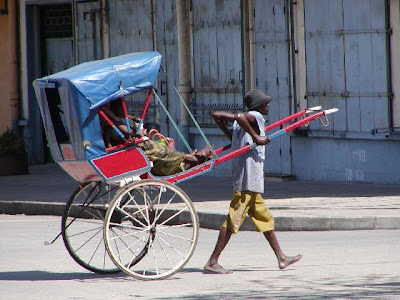 I have really been sucking at posting news articles about Madagascar lately. I have an inbox full of them, just haven't really had the time to get them up.


So, I'll start today. Here are two articles, both published January 19th, 2011. (Thankfully), the translation into English is already done when I receive them. When this all happened we got a text message to stay out of town, which wasn't a big deal. I've heard that they'll be back on strike next week.

For those that don't know, a pousse-pousse/rickshaw looks like this:Article #1
700 rickshaw cycles impounded

The 42 people arrested during the clash in Toamasina last Monday were not yet released until late yesterday. At the latest news, about 700 rickshaw cycles were impounded during the roundup conducted by the police since Saturday. Monday night, police have patrolled in the whole city to contain the demonstrations that occurred in several places. Yesterday, the calm came back in the capital of Betsimisaraka. …
1 comment
Read more 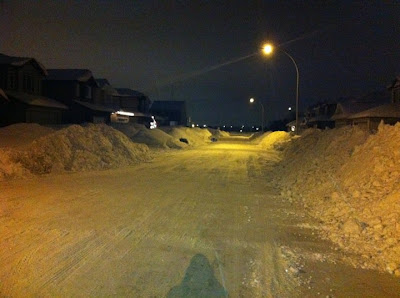 I think that my Canadian body is suffering from an extreme case of "weather jetlag". Even though I've been here for over a year and a half, my body is still on Canadian time and thinks that it's like this outside:
But in reality, it's +33*C here most days(not including humidty factor, which usually bumps it up to +41*C). So after a couple of hours of dancing on a Saturday night (in a well ventilated club, I should add), I look like this: Can you see the sweat dripping off of my chin?!?!
No, I did not just participate in a wet t-shirt contest!!!

The only solution I can come up with is to contact Shamwow and ask them to sew me a dress, a cute skirt and shirt, or even a freaking onesie to absorb the enormous quantities of sweat that I produce in this country. (If you aren't familiar with the Shamwow, first off - please get out less and turn your TV for a minimum of like...an hour a week. Second - it's a magical material that absorbs TWELVE times it's weig…
Post a Comment
Read more Here's a picture of our entrance way in the house.

Notice anything? Three pairs of shoes, two black, one pair of runners. But look a little closer....
And you will see two completely different runners. Difference size, different colors, and different name brands.
Yet somehow, when I was packing to go to Paris from Belgium, I took one of my friend's shoes and one of mine. And into the suitcase they went.


This made me SO mad because for the last while I've been getting out running three times a week (when I'm not on my deathbed). And it's not just like I can head out to the local Running Room and pick up another pair. (Although some people are telling me there is a market where you can buy shoes here.....I'm skeptical that they have non-Malagasy sizes).

HOWEVER, a few days after I got back to MG, I remembered that for some reason.....I had an extra pair of old runners in my filling cabinet. Why? Doesn't everyone have a pair of runners in their filing cabinet???…
2 comments
Read more 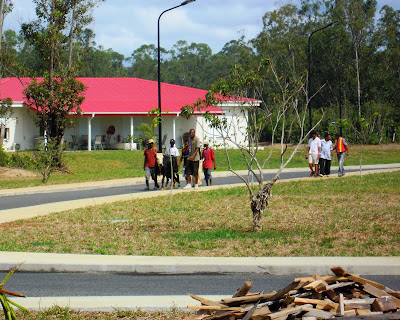 ***Warning. I'd love to use the disclaimer "No animals were harmed or injured in this the making of this post"....but that's not gonna fly. There are a few pictures on this post that might be a bit disturbing. The zebu was killed in a humaine manner and every part of the zebu will be used by the local people****

This morning I woke up and went to the zebu sacrifice. It was only 8h30, but it was freaking hot outside!!

By 8h35 there was a group of about thirty or so, all of us whiteys, with our cameras strapped around our necks to see the sacrifice.

I'm not sure why, but the zebu had to be brought it from Muhumbo, about a two hours' drive (and it's not a pretty drive. The roads are really bumpy and rough). For some reason, they brought it back IN back of the Housing Manager's SUV. (I think he'll need his car detailed this weekend) and they tied it up outside of his office overnight. Apparently, the zebu didn't travel well (no one really does on …
3 comments
Read more 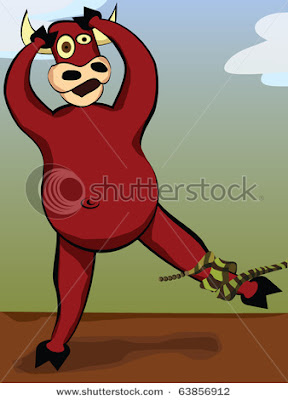 Every so often, I get a little complacent and forget just where I am. I don’t feel like I'm a stranger living in a foreign world. I just feel like a normal person doing a normal job.

And then, to keep me in check, and remind me that I am indeed in a very foreign place different from the world that I’m used to, I get an email like this:

To: Village Residents (that would include me)
From: Housing & Camp Superintendent


In line with Malagasy tradition we will conduct a ceremony at the village tomorrow starting at 8.30am. The ceremony is to bless the village and ensure that it will be a safe and happy place for the residents to live.

The ceremony will take place between house #707 and #709. Amontana road will be blocked to vehicular traffic from 8.30am alongside house #616 until 1pm in the afternoon. Please make sure that your vehicles are out of this area before 8.00am if you wish to use them during the morning.

Bruges with my Bestie. 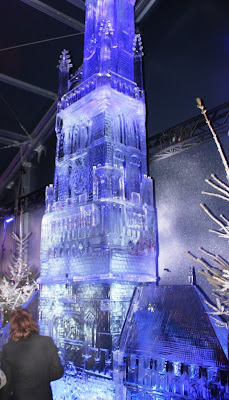 First off, I hate the word "Bestie" but it sounds good. Second, this post is loong overdue. But I've been busy being lazy, working, and being sick.

On my second last day in Belgium, my bestie and I took the train to Bruges for the day. Everyone I had talked to told me Bruges was one of the places to go if you ever went to Belgium.

Bruges was a two hour train ride away but went by quickly. In no time at all, we were outside the train station....asking for directions. But in Bruges, they speak Flemish. So they have street names like Anadkahdstaat, and Dawnwktwsdtstaad. Make getting around a little difficult, but we did manage to find an ice sculpture display... Yikes! A little cold on the tush. This was a pretty impressive exhibit (as it should be for 13 euros per person!)
Don't all Canadians live in Igloos? They even had an ice bar! And for two euros, I certainly could go for a shot of Baileys to warm me up! (even if it was ice cold....) Wil…
Post a Comment
Read more
More posts