Good with the Hard

Yesterday was one of the most emotional days that I have had in a very, very, very long time. First off, I was reunited with this beast. 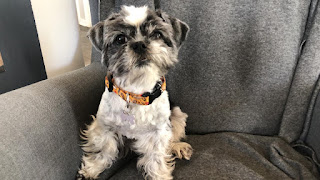 My ex flew her from Montreal to Edmonton and flew back in the same day. I talked about doing the same, but with the time change, it wasn't possible. She was an angel on the flight (after a little sedative) and when she saw me, well, it was magic.

I had asked a friend to drive me to the airport and to drive me home because I didn't know how well I would react to seeing my ex. It's been six months...but...I just didn't know. Also, I wasn't sure how Maggie would respond to the sedative, and since I'm not the greatest driver to begin with, I thought it would be a good idea to get a ride.

I met my ex, and I was shaky. I held Maggie, so happy to have her home again. She was a little groggy, but she ready to party within minutes. This dog is so freaking adaptive to any situation that it amazes me. Maybe owners and dogs to resemble each other...

I couldn't spend much more than 30 minutes with my ex without the past coming up. He didn't want to talk about it, he was uncomfortable. We walked back to the airport, and within minutes, I knew that it was not in my best interests to be around him. I'm not in love with him, I don't want to be with him, but seeing his face was like a huge barrel dump of water of the feelings of abandonment. He came home one day, out of the blue, told me it was oner, and left thirty minutes later, with me alone in his house, in a city where I had no real ties or close connections.

With all of the changes in my life lately and returning back to Edmonton and all of the work that I've done on my condo, it brought back so many other times I've left feeling abandoned, unimportant, and how wonderful it felt when I let him into my life...and I let him and I let his parents into my life, and for the first time in a very long time, I was taken care of. I don't know if I had felt that way before and I don't know if I'll ever feel that way again, and it broke my heart to know that.

My defences are up again, I'm the girl that can take on the world again...ocasionally reaching out to a person or two that may have hurt me in the past, putting my toe in the waters, to see if they will show signs of love, affection, or just plain pay attention to me, other than a few words in an email...and, yes, I'm left defeated. Disappointed. Immediately, I think, Well, that's what you expected, you knew that was going to happen... but after everything that I've gone through...No, I guess I didn't know that was going to happen...and no, I didn't know that was a certainty. I'm still searching for a bond that won't be, I'm still searching for something that went away decades ago, that was a filled for a short time, and that is like pouring salt in the wound each time I finish painting a room, installing some baseboard, finishing some part of the renovation, developing some skill that I had to learn the hard way but managed to. I know that I have to learn to go back to status quo, and to have no expectations. It worked for many, many years...I guess I just thought...that things might change for some reason.

I'm so grateful for all of the wonderful and amazing help that I've had over the last six months. I would be a lost soul without it. instead I feel better than I have in...ten years. I wish all of that gratitude could cancel out those feelings that are harder to feel....but I guess I wouldn't know the good, if I didn't experience the hard.